Pros and Cons of Holiday Camping 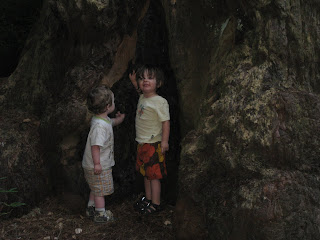 This past 4th of July weekend our family enjoyed a camping trip with Uncle F (owner of previously mentioned Chuck Wagon) and MamaRose's family. Clay is now almost 2 and Tyler is 2 1/2. It was their first time camping together. There were moments that I felt like I might need a t-shirt that said, "I went camping with a 2 year old and survived". Clay and Tyler ran, climbed, played with trucks, rode in the sidecar of a bicycle, slept on a hike to a waterfall, blew bubbles, sang songs and tracked down squirrels. Everyone had a great time, including Baby Zoe who received a lot of kisses from Clay. It was my first time camping on a holiday or busy weekend for that matter. I have come to the conclusion that your expectations for holiday camping need to be different from mid week or low season. Laying down with Clay in the tent for his nap I came up with some pros and some cons. First the cons so that I can end on a good note.

Now, with every gray cloud there is a silver lining so here is my list of pros for holiday camping:

Chances are with my husband's work schedule we will go camping again on a holiday. I will not expect a relaxing union with nature. However, I will look forward to being with family and friends. I have accepted that holiday camping is not exactly camping. But rather a family experience to share with the ones you love where you just happen to sleep in a tent and share a bathroom with a lot of other families. I can do that!

Mama Ruck
California, United States
I am a proud mother, happy wife, grateful friend, and lucky daughter who dabbles in Breastfeeding support, Barefoot Books, Sarah's Silks, backyard gardening and Mom's club activites all while learning and expanding my mothering skills. This blog is a testament to a parent's never ending quest to give their children the world and the ability to explore it.